BBC news coverage of befriender Terrence being surprised by local college carol singers and, later, John Barrowman in concert, stole viewers' hearts this December and shone a light on loneliness in the UK.

News about the 'loneliness epidemic' and the negative effect loneliness can have on health and wellbeing seems to be on the rise and several new awareness raising campaigns have been launched.

Sue Perkins' 30 hours of isolation brought home the message of the Cadbury and Age UK Partnership: "There's a crisis in the UK. 1.4 million older people struggle with loneliness. 225,000 often go a whole week without speaking to anyone. Cadbury are donating the words from their Cadbury Dairy Milk bars to help. See how you can help too."

itv's "1 Million Minutes" winter campaign asks the public to "Pledge your time and help someone lonely with 1 Million Minutes" and directs those interested to Alzheimer's society, Grief Encounter, The Not Forgotten, The Silver Line, Re-engage (formerly Contact the Elderly) and the Princes Trust.

The importance of community groups and transport links in tackling loneliness is highlighted in Country Living's "Let's Stand Up to Loneliness Campaign". Their website also offers readers the chance to take a loneliness poll, which then shows live percentages for answers to each question.

Another survey collecting data about loneliness has been created by No. 1 Magazine's Stop Loneliness Campaign #LetsReachOut. We hope they will update us with results later this year.

Most recently, the #BrewMonday campaign partnership between Samaratins and PGTips takes a positive stance on the supposed most depressing day of the year, 'Blue Monday' on 20 January, by encouraging people to reach out to friends, family or neighbours. 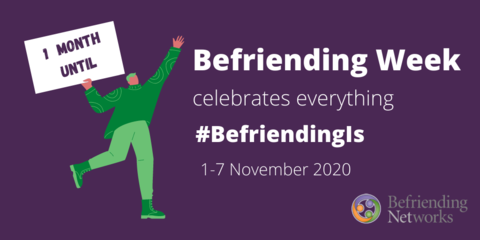 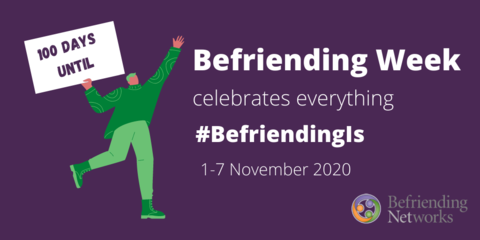 Today begins the countdown to Befriending Week 1-7 November 2020. This year has brought about unprecedented circumstances and challenges, and yet, befriending organisations have adapted and demonstrated their dedication to keeping communities connected. That is why this year, Befriending Week celebrates everything #BefriendingIs

Launching the Befriending Map of Gaps 2020

In January 2020 Alex Hempton, a 3rd year Marketing Management student from Edinburgh Napier University, joined the team at Befriending Networks on a 5-month Research & Marketing placement aiming to update the Befriending Map of Gaps.
The placement turned out a little differently than expected. As responses to Alex’ questionnaire began to arrive from befriending organisations and projects across Scotland, the impact of the Covid-19 pandemic began to hit. Despite this he continued with the research and we are now able to launch the Befriending Map of Gaps 2020.